On Wednesday night I had the absolute pleasure of attending a tasting I had been invited to at Hard Rock Café for their new Red Hot Chilli Menu which is available until Sunday 26th February in celebration of National Chilli Day!

The evening kicked off with a delicious apple chilli martini, a vodka based martini with muddled fresh green apple and chilli syrup.  Now I’m a big fan of chillies, and it wasn’t the first time I had experienced a chilli cocktail, but for those of you who find this concept a bit weird; fear not!  The martini was nice and sweet and the chilli wasn’t overbearing, it was just enough to leave a nice warmth and tingle in the mouth after each sip. 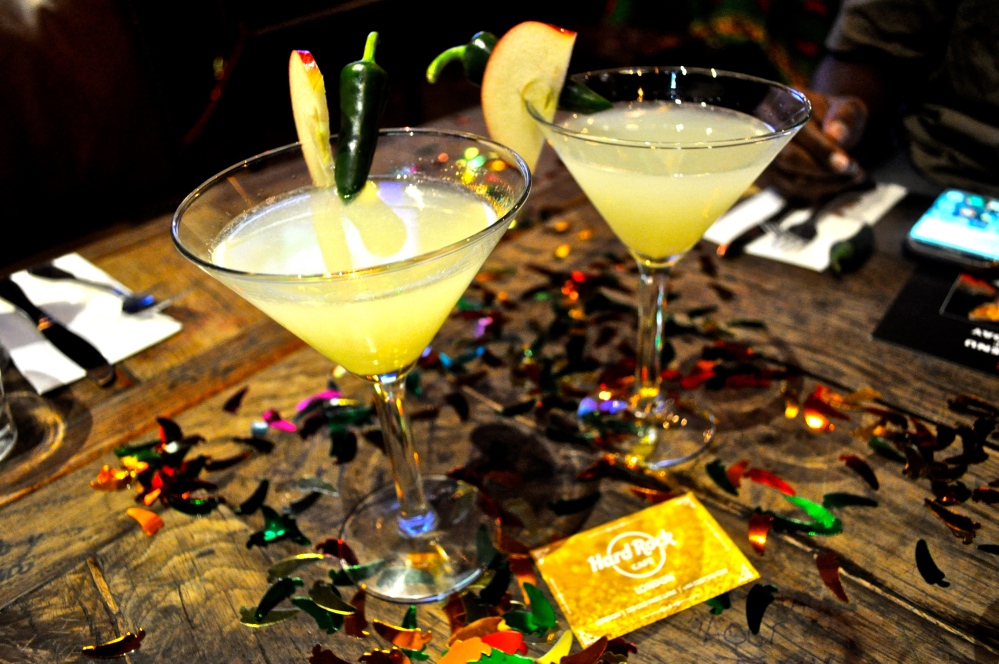 The starter was the Atomic Chicken Wings and I’ve got to give you a heads up… These are not for the faint hearted.  I love the chicken wings that Hard Rock have on their usual menu but they’ve really turned the heat up by dousing these in a scotch bonnet salsa.  Just like the usual chicken wings, the meat was tender whilst the outside was deliciously crispy, but this chilli marinade was seriously spicy!  The blue cheese dip that accompanies the dish was just perfect to take the edge off what was the most appropriate ode to National Chilli Day.

Next up was the Njuda Chilli Burger, the famous Hard Rock burger but this time topped with spicy nduja Italian sausage and three bean chilli, creamy queso sauce and scotch bonnet salsa.  I am the biggest fan of the burgers at the Hard Rock Café, so unsurprisingly I was in love with the patty I have come to know and love.  The sausage and three bean chilli added a nice texture to the dish, and it made a nice change for me to have the creamy queso sauce as opposed to the cheddar I usually opt for.  The burger was nowhere near as spicy as the Atomic Chicken Wings, so this one is definitely a good option for those of you who want to try something a little spicy but are not die hard chilli fans!

Dessert was the Chilli Molten Lava Cake which might sound a bit odd to some of you, but I promise it works!  The chilli was so subtle in this heavenly chocolate cake that even the most chilliphobic of you should give it a go.  The sponge was so moist and not at all dense; my mouth is watering just thinking about it!

Overall I had a great time getting to try these speciality dishes and if you’re in the area it’s worth dropping by before Sunday to give them a whirl.  The great thing about the menu is that it’s not set; you can order just one of the dishes if you’d prefer (although of course personally I wouldn’t have the will power to resist all three).  Hard Rock have been so clever in ensuring that each of the three dishes have a different level of heat to them so that everyone, regardless of how much of a chilli fiend they are, can enjoy having fun trying a new and interesting dish to celebrate National Chilli Day!